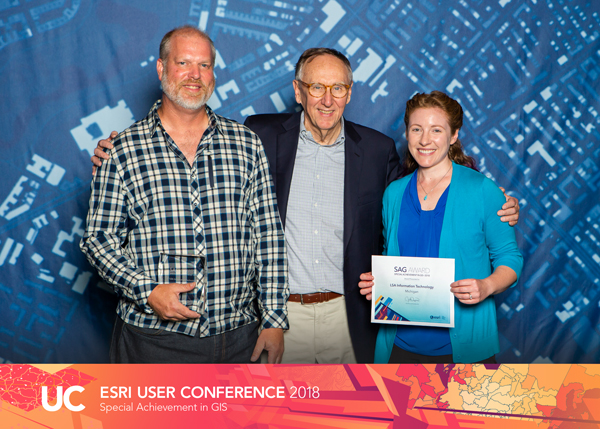 Esri, the global leader in spatial analytics, presented LSA IT with Esri’s Special Achievement in GIS (SAG) Award on July 11 at the annual Esri User Conference. Selected from over 300,000 eligible candidates, LSA IT received the award for its innovative application of mapping, data analytics, and thought leadership in higher-education research and teaching.

The SAG Awards are meant to show appreciation for organizations that are using GIS to solve some of the world’s toughest challenges. Through “The Science of Where”—the technology of GIS combined with the science of geography—the users honored with these awards are demonstrating the most groundbreaking and transformative possibilities of GIS software.

The award recognized LSA IT’s efforts to provide ready and easy access to GIS technologies at an enterprise scale, enabling GIS to be utilized by anyone at the university, from novice to professional GIS analyst. It also recognized the role of LSA IT in facilitating the adoption of GIS in domains in the liberal arts and sciences that have not traditionally been GIS users, such as:

LSA IT was one of 180 organizations in areas such as commercial industry, defense, transportation, nonprofit work, telecommunications, and government to receive a SAG Award; only three higher-ed institutions we recognized worldwide. Esri staff annually nominate hundreds of candidates from around the world for consideration, and Jack Dangermond, Esri founder and president, selects the finalists.

David DiBiase, Director of Education at Esri, nominated LSA IT for the award, citing LSA IT’s, “willingness to share lessons learned about advanced applications of enterprise GIS in an academic context.” David further noted that LSA IT’s efforts, “Have positioned it as one of the GIS Education Community’s most respected, helpful, and influential members.”