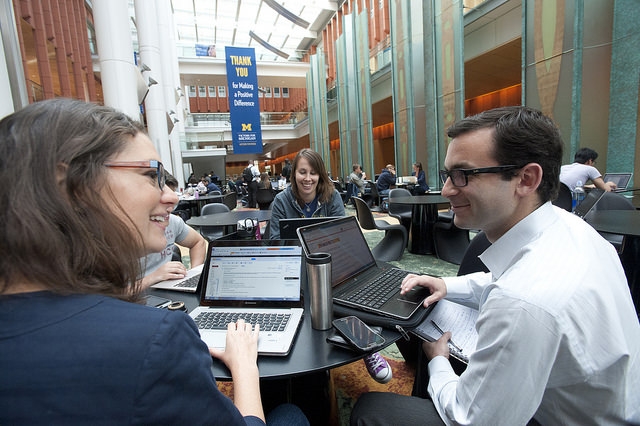 A few months ago, we told you about a change to MWireless that was being tested in all ITS buildings (Arbor Lakes, Administrative Services Building, and Boyer.) The change involved having building occupants connect to MWireless using the 5 GHz frequency exclusively, which is now considered mainstream. Older devices that only support 2.4 GHz WiFi—mainly those manufactured before 2012—would need to connect to eduroam. That testing has proven to be very successful with little to no negative impacts to users.

ITS, with the support of Ross IT, piloted this change at the Ross School of Business buildings starting April 9. Ross was a great choice for this pilot as they were experiencing some interference in their WiFi environment. Because the 2.4 GHz frequency tends to be more crowded and prone to interference, the change to the 5 GHz frequency should lead to faster speeds and better performance for WiFi users located in the Ross School.

According to Cheryl Sobkow, director of Support Services for Ross IT, the MWireless change at Ross has been very successful with few problems reported from their users. They have also sent out a survey to their students to get more detailed feedback regarding the change, and its impact on their wireless usage.

ITS is in the planning stages for a full campus rollout of this change sometime in the fall. We will announce updates as they become available.