As Windows 10 becomes more prevalent on campus, individuals will have access to many new and improved features offered by this operating system. Two tools that have been significantly upgraded are designed as visual aids: the Magnifier and the screen reader Narrator. Both are in the Ease of Access Center Control Panel.

A screen reader like Narrator is most commonly used by an individual with a severe visual impairment or someone who is totally blind. They provide redundant access to on-screen content via speech or braille. They also use keyboard shortcuts for navigation since a blind individual usually does not use the mouse. A list of Narrator-specific keyboard shortcuts, with links to other system and app shortcuts, is available from Microsoft.

One of the biggest improvements to Narrator is voices that speak faster and are more responsive. In this case, more responsive refers to the time between when the user presses a key and when the screen reader starts speaking new text. This is especially important when a user is trying to quickly scan through web pages or other documents.

Another feature closely related to output is built-in support for braille. Mac OS and iOS have a built-in screen reader called VoiceOver which has offered braille support for many years so it is nice to see Microsoft offering this functionality.

A feature that is relatively new to Narrator is Scan mode. In this mode, Narrator scans all of the items on the screen such as tool bars as well as the contents of documents and web pages and places them into a view that is similar to a document. In this mode, the user uses only the arrow keys and the Enter key to interact with all elements on the screen. Navigating normally around the interface without Scan mode allows a user to get around more quickly, however, there is more of a learning curve than when using Scan mode because a user needs to know the Windows keyboard commands to activate and switch between elements on the screen such as menu bars and tool bars. 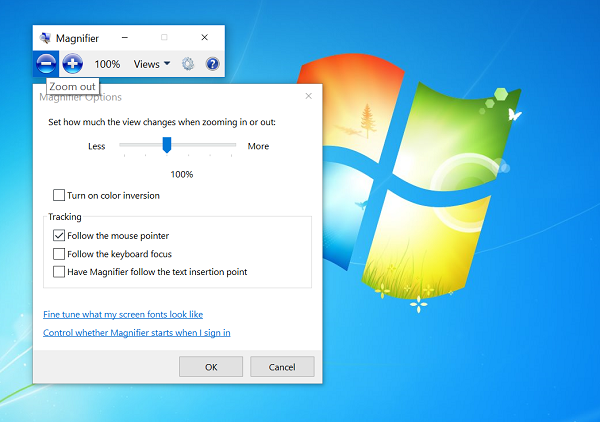 A screen magnifier is used to enlarge text and other on-screen elements. The Magnifier program included with Windows 10 contains three different modes. The first mode magnifies the entire screen. In the second mode of operation, a stationary window is displayed, and the portion of the screen magnified within the window changes as the mouse pointer is moved. The third mode works like a magnifying glass; as the user moves the mouse, the magnification area moves around the screen.

Magnifier has also been gaining many new features as Windows 10 builds are released. One feature that will be handy to some is synchronization with text being spoken by Narrator. Magnifier also added the ability for users to quickly change the magnification level using the scroll wheel on the mouse. Additional features allow the user to change attributes of the text displayed in the magnified window such as size and color to meet their individual requirements. A final feature that will be coming to Magnifier in the fall Creators update is an option for font smoothing, so that text will be easier to read even at high levels of magnification.

While built-in Windows accessibility tools still do not have all the features of third-party programs that many blind and low-vision users need, they are now powerful enough to allow many individuals to perform basic functions on any computer. They also have some distinct advantages; for example, built-in utilities can be activated and used at the login screen to allow users to independently log in. Sites will continue to support third-party programs for those who need them, but having more powerful utilities available in the system is a trend that we hope Microsoft will continue.