A glimpse of the unevenly distributed future could be seen at this year’s Enriching Scholarship conference at the beginning of May. It’s a place where technical concepts are bountiful, but their applications, practicality, and cost efficiency in higher education might need more analysis.

A standout conference session was “Tech Talk 2017: An Overview of Emerging Technologies in Higher Ed.” The talk was led by Patricia Anderson, emerging technologies librarian for the health sciences, who has presented on the topic at Enriching Scholarship since 2011.

So, what is emerging technology? Ask the tech devotees attending Anderson’s presentation and you might be surprised at the diversity of answers: Social media. Digital publishing. The Internet of things. The YouTube revolution. Augmented and virtual reality. Artificial intelligence. 3D printing. The list goes on.

“We need to think about these technologies,” said Anderson. “Who will they work for? Where will they break down? Who will be excluded?” At its core, she said, emerging technology can be thought of as things on the periphery that are moving into the mainstream. 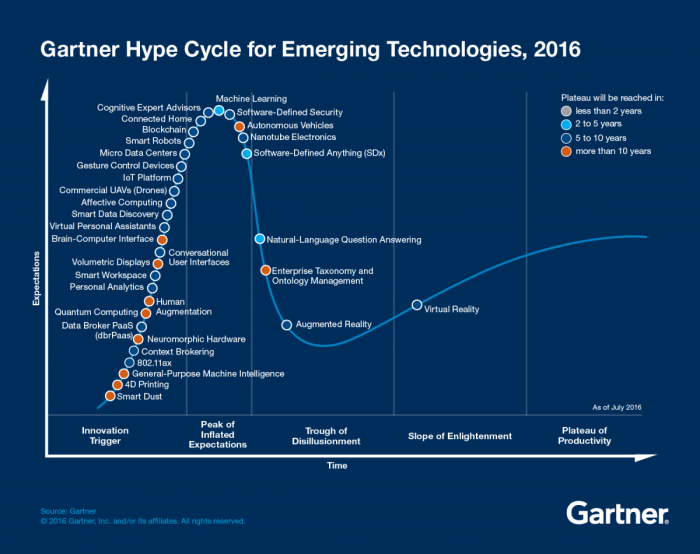 The periphery of tech

The Tech Talk session focused on emerging technology trends in education, but also explored the buzzworthy topics you might hear about at CES or from tech blogs—new ideas that are wonderfully innovative or deeply esoteric, or sometimes both.

As part of the talk, Patricia shared an incredibly detailed mindmap that outlines key questions, industry leaders, tools and resources, inspiration, and much more.

Perhaps the two most influential sources for emerging tech trends are:

Virtual reality is a good example of how perceptions about new technology evolve over time. According to the 2016 Gartner Hype Cycle, VR is emerging from the so-called “trough of disillusionment” and moving into a new phase of enlightenment and productivity.

“Look at the RPGs and immersive games kids are playing in grade school and middle school today,” said Anderson. “Those kids will be familiar with these new technologies when they get to college. So, we have maybe six years to figure them out, build skills, and tailor our curriculum to how they learn.”

By then, maybe the future of VR will be evenly distributed.