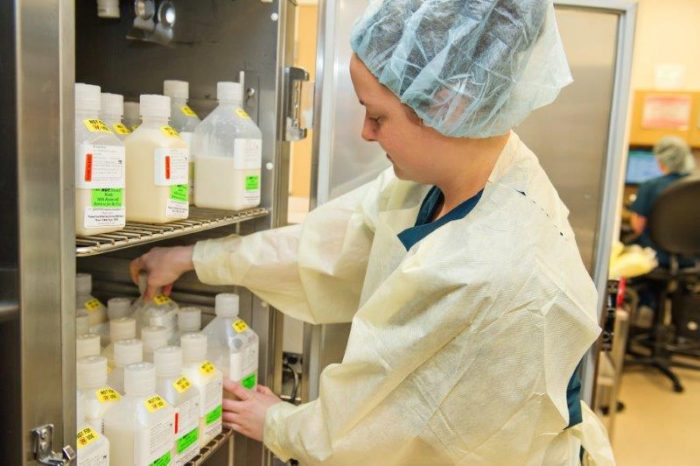 Thanks in part to a barcoding system developed by Health Information Technology & Services, C.S. Mott Children’s and Von Voigtlander Women’s Hospital (C&W) virtually eliminated the misadministration of breast milk to infants in their care.

C&W is home to the first 24/7 formula and breast milk preparation room in a pediatric hospital nationwide. Opened in 2011, the Milk Room stores, prepares, and delivers mixed formulas and breast milk to infants.

“We service 50-60 percent of C&W inpatients on a daily basis – many of whom are in the NICU (Neonatal Intensive Care Unit),” said Sara Tutor, manager of the Milk Room. “When we initially opened, we saw a decrease in misadministration – the wrong baby getting the wrong breast milk. Having one centralized operation resulted in fewer mix-ups.”

While misadministration was rare, it did still occur. Between 2014-2015, three patients received formulas that conflicted with their documented allergies. Between 2013-2015, 18 incident reports were filed that involved near misses or actual administration of breast milk to the wrong patient.

“When something like that does happen, it has a downstream effect. You have to notify two families and test the donor mother and baby for HIV and hepatitis. This can make patients doubt their care,” Tutor said.

An interdisciplinary team of nurses and support staff was brought together, including the MiChart electronic medical record team. “We wanted allergy alerting on our orders so providers would receive a notification if they entered an order that was contradictory to a patient’s allergies. As we moved forward, there was also an initiative to barcode breast milk scanning,” Tutor said.

“We decided the best solution was to mimic other successful workflows for commonly used for medication and food allergies,” said Matthew Enell, clinical informatics pharmacist with Health Information Technology & Services. “Barcoding meant that instead of relying on a manual double-check, nurses could scan a patient’s wristband and the breast milk. If they match, they administer the milk.”

Enell created new breast milk and formula orders, set up scanning for breast milk, and created new labels. The new process went live in August 2016 and the results speak for themselves.

“There haven’t been any incidents of patients getting wrong milk since we went live with the new functionality,” Enell said. “I worked on this for more than a year with lots of different people and all of the hard work paid off. There’s a great sense of accomplishment and pride to see that it’s working and doing what it’s supposed to do.”

Tutor said MiChart barcoding has prevented at least one misadministration. She credits the Milk Room’s recent 365 Days of Safety Award to the engagement of a variety of people across the health system.

“We’ve always had a positive experience working with the MiChart team. Matt did a great job learning about our workflow and he’s continued to support our operation,” Tutor said. “To be recognized by C&W leadership and administration for our work is very meaningful. It gives us a goal to strive for every year.”