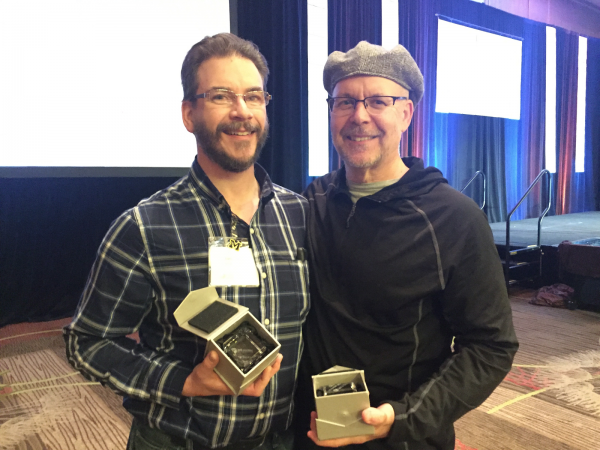 Lance Sloan (l) and Anthony Whyte holding their awards after the ceremony.

Anthony Whyte and Lance E Sloan of ITS Teaching & Learning (TL) each received leadership awards at IMS Global’s Learning Impact Leadership Institute 2017 annual conference held in Denver May 16-19. Both were recognized for their work on the IMS Caliper Analytics™ specification. Also recognized was Charles Severance from the School of information who received the Bill Graves Leadership Award for his many contributions to IMS, including his pioneering work on the widely adopted Learning Tools Interoperability (LTI) specification.

Caliper provides an information model and domain-specific controlled vocabularies for describing learning activities, events and related entities. Serialization of the model is performed using JSON-LD. Caliper also defines an application programming interface (the Sensor API™) for marshalling and transmitting Caliper events from instrumented applications to one or more target endpoints for storage, analysis, and re-use. Industry-wide adoption of Caliper offers academic institutions and ed tech organizations the tantalizing prospect of a more unified learning data environment in which to build new and innovative services designed to measure, infer, predict, report, and visualize.

Whyte chairs the IMS Caliper Working Group and is the lead author of the forthcoming Caliper 1.1 specification (expected June 2017). He is also lead developer for two of the project’s six Caliper Sensor reference implementations, one written in Java (caliper-java) and the other using Node.js (caliper-js). He speaks regularly about Caliper at conferences, webinars, bootcamps and other events. This is Whyte’s third IMS Leadership Award as a member of Team Caliper.

Sloan is also a member of Team Caliper and leads development of the team’s PHP sensor implementation (caliper-php). He wrote the original 1.0 version and has finished work on 1.1 (expected release June 2017). His work on Caliper and ITS’s prototype learning analytics infrastructure has also netted him a growing list of conference presentation appearances.

Caliper generated a good deal of buzz at LILI 2017. An Edsurge opinion piece described a talk on implementing Caliper as “[o]ne of the most exciting and well-attended sessions” of the conference.  Such positive feedback is yet another indicator of the impact that ITS TL staff provide in the teaching and learning technology domain.