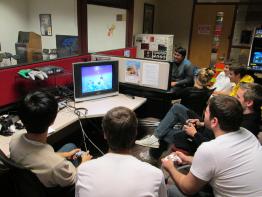 U-M collects video games. Lots of them. The university’s Computer and Video Game Archive features more than 7,000 titles—everything from time-honored favorites such as “Pac-Man” and “Frogger” to newer fare, including “Call of Duty” and “Halo”—on dozens of gaming systems. Now in its 10th year, the CVGA collects video games in the same way that other archives pursue books, journals or historical artifacts. “It’s important to have an archive like this, because games are part of our culture,” said Dave Carter, who got it up and running in 2008. Carter, who serves as a reference services librarian and the CVGA’s archivist, previously was a lecturer at the School of Information and is trained as an electrical engineer, specializing in optics and radio waves. He’s also a lifelong video game fan, having made frequent use of an Atari 2600 as a kid. “If you’d told 12-year-old me that this would be part of my job growing up, I’d think that was pretty cool,” he said with a smile. The archive is open to anyone—students and members of the public alike.