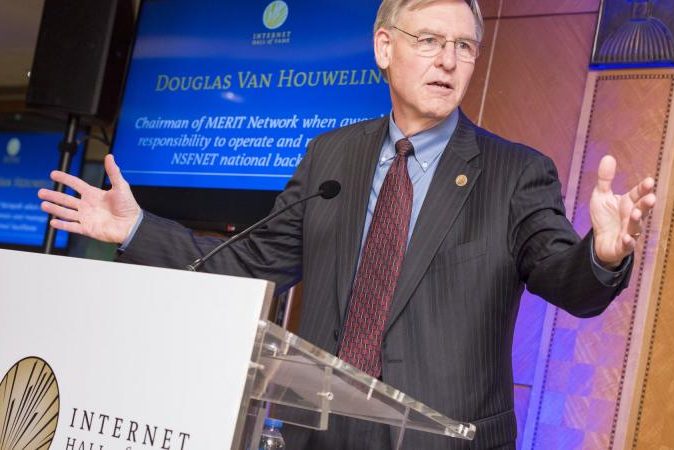 Douglas Van Houweling at his induction to the Internet Hall of Fame in 2014. (UMSI)

Douglas Van Houweling, UMSI professor of information, also known as the “Father of the Internet,” retired in April after a long, remarkable career at UMSI and U-M.

During his time at U-M, Van Houweling has served as UMSI associate dean for research and innovation; U-M dean for academic outreach and vice provost for information and technology; and U-M vice provost for information technology. But Van Houweling is perhaps best known for his work with early technology that led to building of the Internet. He has been inducted into the Internet Hall of Fame for his seminal work in the development of what became “the world-wide web.”

“I’ve been extremely fortunate to have played a role in information technology here at the university and nationally over the last 33 years,” Van Houweling says. “The university has enabled me to serve in a diverse set of roles as the IT revolution has unfolded. I am deeply grateful for those opportunities.” While Van Houweling may be retiring, he isn’t planning to move to some island in the South Pacific. He says he will continue to conduct research and to be engaged in some university projects.

Thomas A. Finholt, UMSI dean, said of Van Houweling: “Doug has spent his career in key leadership posts spanning multiple universities, Internet2, and culminating here at UMSI.  We are very grateful to have had the benefit of his wisdom and experience on behalf of the school.”

Van Houweling was one of four UMSI faculty who retired this spring who have left their own technology-related legacies: