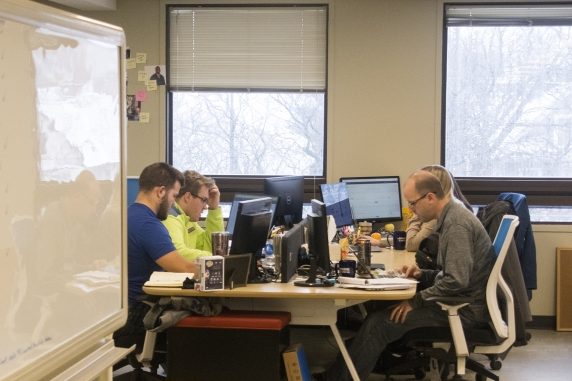 Inside the offices at SPARK. (Alec Cohen/Daily)

Duo Security—an Ann Arbor-based company launched by two U-M alumni in 2009—is at the forefront of a fledgling wave of early-stage technology startups that have chosen to take root, not in the San Francisco and East Coast technology hubs, but within Metro Detroit. “Ann Arbor is our home,” Dug Song, one of Duo Security’s founders, said in an October, 2017 interview with TechCrunch. “With more than 350 employees based here, we’re proud of our Michigan roots and our heritage of global cybersecurity innovation in Southeastern Michigan. The region has a wellspring of talent that we will continue to invest in and hire from, and attract talent from outside the state as well.”

As of 2016, there were 49 active venture-based startups in Ann Arbor, according to the Michigan Venture Capital Association Annual Research Report. These companies represent 35 percent of startups in the state, and are are primarily split between information technology and life sciences sectors, with the remainder scattered across advanced manufacturing and energy. In December 2017, VentureBeat described Ann Arbor as one of four emerging national tech hubs, alongside much-larger Pittsburgh, Indianapolis, and Raleigh. Read the rest of the story in the Michigan Daily.