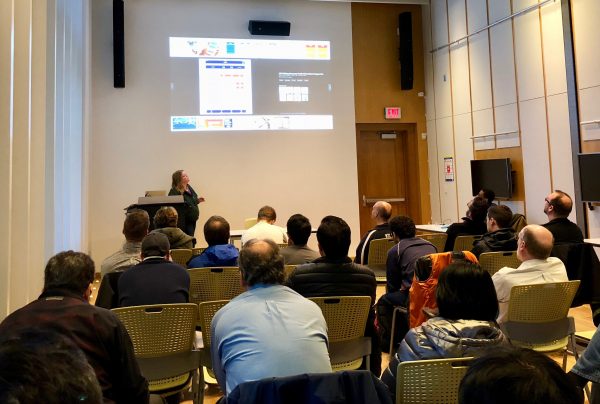 You never know what you’ll see at a U-M Mobile Developer Community meeting. The most recent one, held at North Quad on November 28, was no exception.

About 35 attendees learned, for instance, about MGoView, a U-M Bicentennial mobile app that provides a fascinating look at U-M history. The app utilizes augmented reality, 360-degree view, and other features. It was presented by Evan Hoye, School of Information (SI) marketing and media assistant. Colin Tyrrell, a Business Administration master’s student, shared a demonstration of React Native, a fast, easy tool for developing apps. “I built a simple ‘Hello World’ app in less than three minutes” Tyrrell said during his demo. He added that he enjoyed being able to share “a friendly way to introduce app development to students with no experience.”

Other presenters featured talks about a tool that allows non-programmers to create mobile AR apps; how a beta version of the redesigned Michigan App is being tested on campus; and a Bluetooth-enabled app, BPTrack, that monitors hypertension and blood pressure. Along with Hoye and Tyrrell, presenters included Michael Nebeling, SI assistant professor; Laurie Buis, assistant professor at SI and the Medical School; and Will Burns, mobile/portal/web manager for ITS.

The Mobile Developers Community, Hoye says, “gives us an opportunity to be involved in that area of software development where we can share insights and garner support. That helps to cooperatively promote the University’s mobile development efforts and build up the community as a whole.”

Buis was presenting for the second time for the group, which she found a useful venue for her message “Mobile health is a hot topic right now and lots of developers are working in this space,” she says. “But working within the healthcare system with a goal of transforming care isn’t something that can be done in isolation. I enjoy talking with attendees who maybe haven’t thought fully about the challenges associated with the integration of consumer technology in the healthcare industry.”