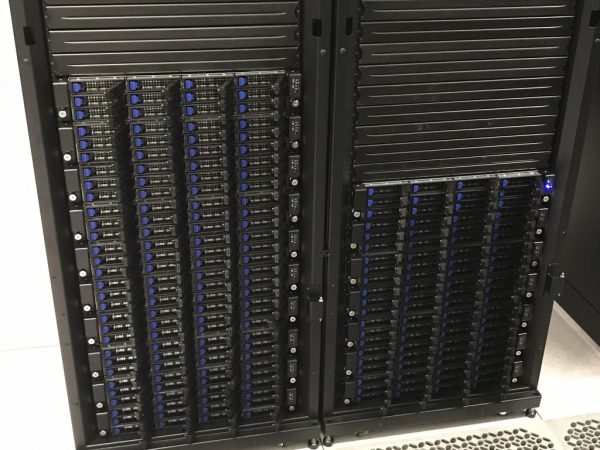 A new partnership between the University of Michigan and Cavium Inc., a San Jose-based provider of semiconductor products, will create a powerful new Big Data computing cluster available to all U-M researchers.

The $3.5 million ThunderX computing cluster will enable U-M researchers to, for example, process massive amounts of data generated by remote sensors in distributed manufacturing environments, or by test fleets of automated and connected vehicles.

The cluster will run the Hortonworks Data Platform providing Spark, Hadoop MapReduce and other tools for large-scale data processing.

“U-M scientists are conducting groundbreaking research in Big Data already, in areas like connected and automated transportation, learning analytics, precision medicine and social science. This partnership with Cavium will accelerate the pace of data-driven research and opening up new avenues of inquiry,” said Eric Michielssen, U-M associate vice president for advanced research computing and the Louise Ganiard Johnson Professor of Engineering in the Department of Electrical Engineering and Computer Science.

“I know from experience that U-M researchers are capable of amazing discoveries. Cavium is honored to help break new ground in Big Data research at one of the top universities in the world,” said Cavium founder and CEO Syed Ali, who received a master of science in electrical engineering from U-M in 1981.

Alec Gallimore, the Robert J. Vlasic Dean of Engineering at U-M, said the Cavium partnership represents a milestone in the development of the College of Engineering and the university.

“It is clear that the ability to rapidly gain insights into vast amounts of data is key to the next wave of engineering and science breakthroughs. Without a doubt, the Cavium platform will allow our faculty and researchers to harness the power of Big Data, both in the classroom and in their research,” said Gallimore, who is also the Richard F. and Eleanor A. Towner Professor, an Arthur F. Thurnau Professor, and a professor both of aerospace engineering and of applied physics.

Along with applications in fields like manufacturing and transportation, the platform will enable researchers in the social, health and information sciences to more easily mine large, structured and unstructured datasets. This will eventually allow, for example, researchers to discover correlations between health outcomes and disease outbreaks with information derived from socioeconomic, geospatial and environmental data streams.

U-M and Cavium chose to run the cluster on Hortonworks Data Platform, which is based on open source Apache Hadoop. The ThunderX cluster will deliver high performance computer services for the Hadoop analytics and, ultimately, a total of three petabytes of storage space.

“Hortonworks is excited to be a part of forward-leading research at the University of Michigan exploring low-powered, high-performance computing,” said Nadeem Asghar, vice president and global head of technical alliances at Hortonworks. “We see this as a great opportunity to further expand the platform and segment enablement for Hortonworks and the ARM community.”