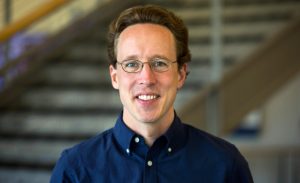 J. Alex Halderman, professor of computer science and engineering, received a lot of media attention in the days after the 2016 presidential election for voicing concerns about the integrity of electronic voting systems in the U.S. In this extensive interview with The Chronicle of Higher Education, Halderman, director of U-M’s Center for Computer Security and Society, contends that the initial reports of his suspicions were overstated. The most likely scenario, he believes, is that Donald Trump legitimately won the election through the Electoral College system. However, his work since then has not allayed his concerns about the overall integrity of the nation’s voting systems. “The 2016 election is pretty well settled, but I am extremely worried about what is going to happen in 2018 and 2020 unless we act now to beef up the defense of these systems,” he says.